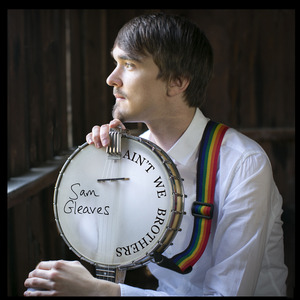 Born and raised in Wythe County in southwest Virginia, Sam Gleaves performs innovative mountain music with a sense of history. Under the direction of local teacher and barber Jim Lloyd, Sam took up stringband instruments as a teenager, including the banjo, guitar, fiddle, autoharp and dulcimer. With his mentor ballad ...

singer Sheila Kay Adams, Sam found his voice and fell in love with the mountain love songs, which he carries into his generation with pride. Sam’s performances combine traditional Appalachian ballads, dance tunes, original songs and the stories that surround the music. Sam earned a degree in Folklore from Berea College and has performed throughout the east coast of the U.S. and internationally in Ireland and Japan with the Berea College Bluegrass Ensemble, directed by Al White. Sam writes new songs in the Appalachian tradition, telling stories about love, the home place, working people and present social issues in the mountains. Sam’s music has been featured on Kentucky Educational Television, West Virginia Public Radio, Appalshop’s WMMT FM, and in print for LEO Weekly and Still Journal. With three recordings under his belt, (Shadow of a Song 2010, A Little While In The Wilderness 2012, and Carrying On: Live Performances 2013) Sam is currently collaborating with producer and activist-musician Cathy Fink on a debut album of his original songs (titled Ain’t We Brothers) to be released in summer 2015.

Two guys were playing fiddle and guitar when the teenaged, music-obsessed Sam Gleaves walked into the barbershop in Rural Retreat, Virginia, sporting his tie-dyed Dylan shirt and his flashy guitar. The southwestern Virginia shop functioned as an impromptu hub for local elders and aspiring players, a music school where people gathered, jammed, and traded ideas and advice.

“I was stunned to see two people my age playing,” Gleaves recalls. “It was the first time I saw old-time music played live, but Jim [Lloyd, Gleaves’s mentor] asked me to sit down and try to play along.” He floundered though “Forked Deer,” and he was hooked. “I was struck by the community that surrounds this music, how willing they were to share with me,” reflects Gleaves. “I just loved the music and it gave me a compass to build my life around.”

While the lodestar may be Gleaves’s deep Appalachian roots, the young singer-songwriter draws on his experience—and a long history of arts activism of the region—to craft tales that resonate simultaneously with today’s struggles and yesterday’s trials. On his debut, Ain’t We Brothers (release: November 13, 2015), Gleaves, with production guidance from Grammy-winning folk powerhouse Cathy Fink, has gathered a new musical community around him, including some of the best-loved players in the scene (Tim O’Brien, Tim Crouch, Janis Ian, Fink and Marcy Marxer) and old, dear friends (singer and former bandmate Donavan Cain, Southwest Virginia banjo player Tyler Hughes).

In little-known traditional pieces, compelling original songs, and few reimagined old favorites, Gleaves chronicles the blighted hillsides and laughter-filled porches, the faith and distress, the honest loves and true heartbreak of people around him. With one important element to his perspective: Gleaves is openly gay.

“I’ve had the space, I’ve been given the gift, to be who I am. My parents gave me permission to be who I am by supporting me. I didn’t have to hide in my life or in my writing,” says Gleaves. “Writing is a private experience, but I’ve never had to separate who I am from what I write. If a story moves me, I don’t think twice about it. If it involves a gay person from Appalachia and it moves me, I’ll go for it.”

Gleaves hails from a storytelling family, and it’s left its mark on his songs. “My dad is a wonderful storyteller, and all my grandparents are. I took it in by osmosis,” recalls Gleaves. “Our family would sit around and tell stories about what’s happened to them, and that was really central to my upbringing. I came to really value stories, especially stories from Appalachia.”

The stories hit familiar notes—the working family coping with generations of working in the mines (“Working Shoes”), the courtship of devoted lovers—but are just as likely to leap off in unexpected directions. The title track, based on the life story of Sam Williams, a gay West Virginia coal miner ostracized and harassed for his sexuality, evokes a side of Appalachian people’s lives usually overlooked in bluegrass and old-time music.

But in this, too, Gleaves is part of a lively, storied lineage. His work speaks to the long line of dedicated, progressive voices in the mountains, pushing against discrimination and parochial attitudes while cleaving to their beloved regional art forms and storytelling. When Gleaves was studying at Berea College,a hotspot in Appalachian arts and organizing, mentored by writers like the acclaimed Silas House, Gleaves learned more about everything from mining’s environmental impact and the achievements of community organizing, to the beauty of activist music of artists like Sweet Honey in the Rock, Loretta Lynn, and Joan Baez (whose work in conflict zones inspired “Angel in the Ashes”).

The thoughts entwined, and “it made me realize there was still need to write songs about people who face these circumstances, be it living under a mountaintop removal site, or fighting for equality,” he muses. “There’s still a need to tell stories through music, to get people to relate emotionally to someone who’s different from them. Often, people will consider what someone is saying in a song, without thinking about political stances. There’s more emotional appeal.”

This appeal flows from the music, the drive of old dance tunes (“Creek’s Froze Up / Callahan”), the contemplative bittersweet ballads (the goosebump-inducing a cappella “Johnny”) and old-school country songs that seep into the soul. Gleaves has that lonesome arc, that warm twang to his melodies and arrangements that make them both moving and memorable.

Twists to old songs (a sweet LGBT take on The Carters’ “My Dixie Darling”) work side-by-side with new songs that touch old strings, Gleaves’ beautiful duet, “Two Virginia Boys.” “When I met my partner, I was so struck by him. He was a good musician from the same region in Virginia. I fell head over heels and it was mutual,” remembers Gleaves. “I wrote the first verse on the back of an envelope, but I wanted to weave in an old traditional song, ‘East Virginia Blues.’” The result is a perfect love ballad.

Gleaves met Fink, who nurtured the album into being, at a music camp where both were teaching. Fink was overwhelmed by Gleaves’s work and urged him to record. Fink and Gleaves went to Nashville to record and invited the cream of Americana to contribute to Ain’t We Brothers.

“I have heard hundreds of songwriters in my 42 years of touring and performing. Sam's voice, in writing and singing, stood out as a superlative,” says Fink. “In the tradition of Woody Guthrie meets George Jones meets Dolly Parton meets Ola Belle Reed, Sam's music stretches us, brings us in and is the best of musical storytelling. I could not ‘not’ do this project!”

“Cathy Fink has been a tremendous mentor to me throughout this project. As a producer, she empowered me to believe in my songs and organized a team of supporters, artists and professionals to do the same,” Gleaves enthuses. “The record truly is a community effort and our friendship enriches it.”

At the heart of the project was always the stories--and the lives behind them. “The music was always a gateway to get to know my own culture better. I love the honesty of traditional songs, the way they tell of the struggle of poor or oppressed people, but also tell stories about real love, real life, real work,” Gleaves muses. “But as I’ve made my own songs, I’ve learned a story doesn’t have to be old to be powerful. What’s happening now is just as vital to history.”

"Courageous as hell and country to the bone -- Amazingly talented Sam Gleaves, the best young songwriter around, heads into new territory with his brilliant album Ain’t We Brothers, joined by a group of world-class musicians and singers. Varied, intelligent, moving -- these songs stay with you." --Lee Smith, Appalachian author